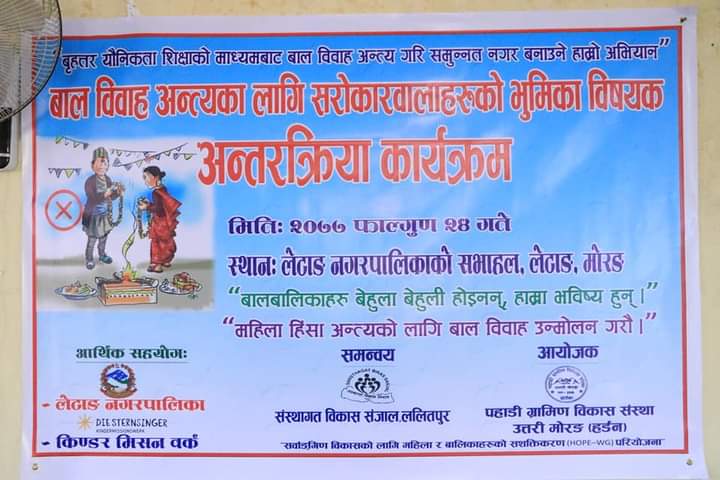 Hilly Rural Development Organization Nepal (HRDON) organized the interaction program for Child Marriage prevention on 8th March 2021, in Letang, Morang. Mayor of Letang Municipality Mr.Shankar Rai inaugurated the program expressing his commitment for child marriage prevention with the stakeholders. Inaugurating the program, Mayor Rai said that "Municipality would reward those who provide confidential information on child marriage to the municipality"

He said that child marriage is only adding problems in the community. Both mother and child will be in high risk. He continued "marrying at an early age cause conflict in the family, high chances of divorce cases and increased economic deprivation leading to drug addiction at an early age. Deputy Chief Mr. Krishna Niraula said that there is supported needed from all sides for the successful campaign to make Nepal a child marriage free country by 2031. Mr. Niraula also mention we need to be ready to address the consequence caused after the separation of married couple is done. The program was held on chairmanship of Mr. Tek Bahadur Limbu Chairman of HRDON, school teachers, students, public representatives, media persons, women's rights activists were present in the program. Mr. Suresh Adhikari, Program Coordinator of HRDON, said that During Lockdown, 12 child marriage happened in ward no 1,2,7 and 8. Out of which only 2 child marriage was stopped.